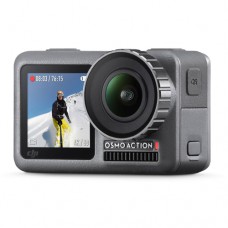 Whereas normally you can shoot only above or below the water's surface with the same lens, the DomePro Over-Under Dome Port from GoPole enables you to shoot both over and under the water line. Half your shot will be of what's above the water and half below. In addition to everything, the dome shape of the optics removes lens distortion and vignetting and lets you capture the underwater part of the shot with more clarity. The Dome Port is compatible with the GoPro HERO7 Black, White, and Silver, HERO6 Black, HERO5 Black, and HERO 2018, and it attaches to the camera without any additional accessories required. It's actually designed with a housing built-in on the rear, and your GoPro simply inserts into it.

Measuring 6" in height, the Dome Port is much larger than the camera and can be more easily held midway at the water surface. An optional handgrip can be very helpful for this, and a 2-prong GoPro mount is provided on the bottom specifically for that. Furthermore, water line markings on the rear help you maintain the balance. The 2-prong GoPro mount can also be used for attaching the Dome Port to other supports.